In this study, we obtain experimental understanding of the mode characteristics of a droplet placed on a flat surface under periodic forced vibrations. The detachment conditions for the droplet on the surface were also studied. In order to estimate the resonance frequency of a droplet placed on a hydrophobic surface, theoretical modelling was combined with experimental approaches. Two high speed cameras were used to observe droplet characteristics, including mode shape, detachment, occurrence of secondary droplet breakup, and horizontal torsional motion. Two cameras were installed to the right above the droplet and at the side of the droplet. There was no more than an 18% discrepancy between the theoretical and experimental resonance frequencies. This discrepancy was likely caused by several factors such as contact line friction, nonlinear wall adhesion, and experimental uncertainty. When applying a relatively low voltage to a speaker, the contact line of a droplet was pinned and shape oscillations of the droplet appeared in a bilaterally symmetric way. In contrast, at higher voltages, the contact line depinned and the shape oscillations became more active. For excitation frequencies identical to the mode frequency, the lobe size of the droplet was relatively larger than that at neighbouring frequencies. The experimental results also indicate that the generation and complete detachment of small-scale droplets occur only at the 2nd mode. 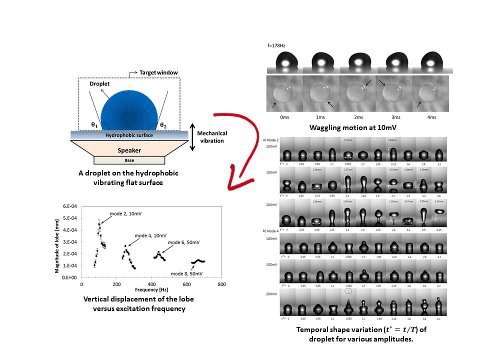