A simple optical deflection technique was used to monitor the vibrations of microlitre pendant droplets of deuterium oxide, formamide, and 1,1,2,2-tetrabromoethane. Droplets of different volumes of each liquid were suspended from the end of a microlitre pipette and vibrated using a small puff of nitrogen gas. A laser was passed through the droplets and the scattered light was collected using a photodiode. Vibration of the droplets resulted in the motion of the scattered beam and time-dependent intensity variations were recorded using the photodiode. These time-dependent variations were Fourier transformed and the frequencies and widths of the mechanical droplet resonances were extracted. A simple model of vibrations in pendant/sessile drops was used to relate these parameters to the surface tension, density and viscosity of the liquid droplets. The surface tension values obtained from this method were found to be in good agreement with results obtained using the standard pendant drop technique. Damping of capillary waves on pendant drops was shown to be similar to that observed for deep liquid baths and the kinematic viscosities obtained were in agreement with literature values for all three liquids studied. 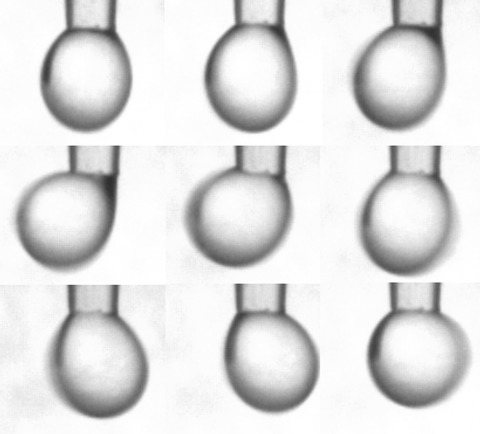