Liquid-crystalline phases in all-DNA systems have been extensively studied in the past and although nematic, cholesteric and columnar mesophases have been observed, the smectic phase remained elusive. Recently, it has been found evidence of a smectic-A ordering in an all-DNA system, where the constituent particles, which are gapped DNA duplexes, resemble chain-sticks. It has been argued that in the smectic-A phase these DNA chain-sticks should be folded as a means to suppress aggregate polydispersity and excluded volume. Nevertheless, if initial crystalline configurations are prepared in silico with gapped DNA duplexes either fully unfolded or fully folded by carrying out computer simulations one can end up with two different phases having at the same concentration and temperature the majority of gapped DNA duplexes either folded or unfolded. This result suggests that these two phases have a small free energy difference, since no transition is observed from one to the other within the simulation time span. In the present manuscript, we assess which of these two phases is thermodynamically stable through a suitable protocol based on thermodynamic integration. Our method is rather general and it can be used to discriminate stable states from metastable ones of comparable free energy. 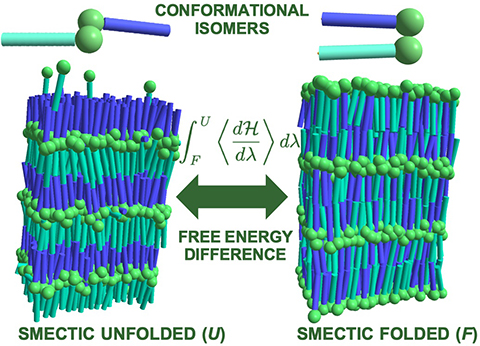