We put forward a theoretical framework to calculate pair distribution functions in the nematic liquid crystals formed by sphere-cylinders that self-assemble in linear chain structures. For a nematically ordered system, one can distinguish between the spatial correlations in the plane perpendicular to the crystalline axis, and in the direction parallel to the latter. Following this separation, we show that the RDFs in the parallel case can be described using a superposition of a chain model and Onsager distribution, whereas the RDFs in the perpendicular case turn out to be that of the soft disks. Based on this concept, we show how the spatial correlations in the system are influenced by the nematic order parameter. We conclude that even if the nematic ordering is high in the system, the imperfection of the crystal is strongly reflected in the pair distributions. 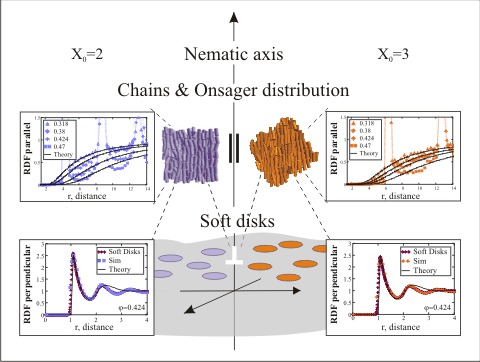