Two-dimensional steady-state solutions and their stability analysis are presented for a gravity-driven thin film of a thermoviscous liquid. The governing equations and boundary conditions are simplified using the lubrication approximation. The analytically obtained film thickness evolution equation consists of various dimensionless parameters such as the Marangoni number, Biot number and thermoviscosity number. The viscosity of the liquid is assumed as an exponential function of temperature. The viscosity decreases within the liquid film as the temperature increases. Due to localized heating interfacial temperature gradients generate surface tension gradient which results into thermocapillary or Marangoni stress. The Marangoni stress opposes the fluid flow at the leading edge of heater leading to an increase in the film thickness locally. This locally thick structure becomes unstable beyond critical values of the parameters that leads to formation of rivulets in the transverse direction. Using the linear stability analysis it is found that the Marangoni stress and the thermoviscous effect have a destabilizing effect on the thin-film flow. At much higher values of the thermoviscosity number another mode of instability appears which is known as thermocapillary instability which leads to oscillating film profiles. For streamwise perturbations, the destabilizing effect of the thermoviscosity number for localized and uniform heating remains consistent. 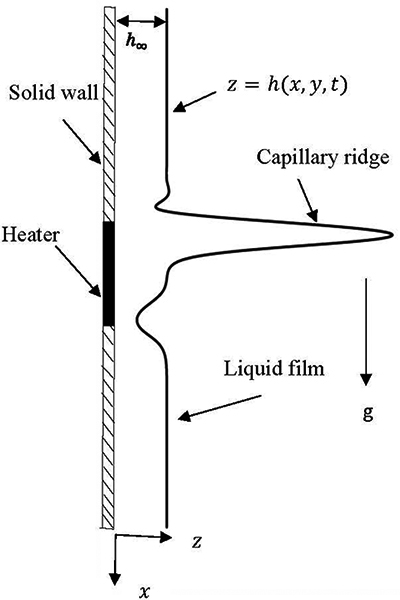