The stability analysis of a gravity-driven thin liquid film with an insoluble surfactant flowing over a surface with embedded, regularly spaced heaters is investigated. At the leading edge of a heater, the presence of a temperature gradient induces an opposing Marangoni stress at the interface leading to the formation of a capillary ridge. This ridge has been shown to be susceptible to thermocapillary (oscillating in the flow direction) and rivulet (spanwise periodic pattern) instabilities. The presence of an insoluble surfactant is shown to have a stabilizing effect on this system. The governing equations for the evolution of the film thickness and surfactant concentration are obtained within the lubrication approximation. The coupled two-dimensional base solutions for the film thickness and surfactant concentration show that there is no significant change in the height of the capillary ridge at the subsequent heaters downstream. The height of the capillary ridge is reduced by the presence of the surfactant. For very small Peclet number, the presence of multiple heaters has almost no significant effect on the film stability as compared to a single heater and similar trends are observed between the two configurations in the presence of the surfactant as for the case of a clean interface. However, for large Peclet number, the effect was observed on both types of instabilities for certain heater configurations. The Biot number is shown to have a strong effect on the stability results wherein the dominant mode of instability is altered (from rivulet to thermocapillary instability) for a passive or no surfactant case with increase in the Biot number. For an active surfactant thermocapillary instability is found to remain the dominant mode of instability for all the values of the Biot number. It is shown that increasing the number of heaters beyond a couple does not further affect the stability results. 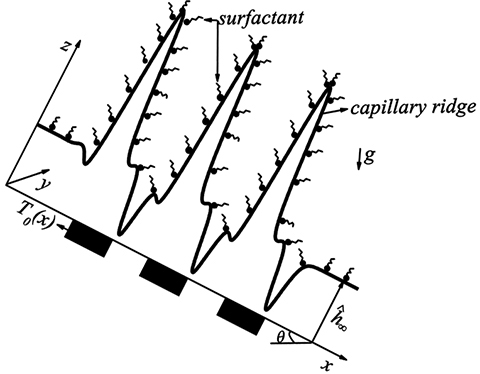