The stability of a thin electrolyte liquid film driven by gravity over a vertical substrate is presented. A film thickness evolution equation is derived and solved numerically. The substrate is non-uniformly heated from below which is modeled by imposing a temperature profile at the liquid-solid interface. The electrohydrodynamics is included in the model with Maxwell’s stress tensor. The governing flow and energy equations are simplified using the lubrication approximation. The Poisson-Boltzmann equation with Debye-Hückel approximation is used for the potential which is generated inside the film due to a charged layer at the liquid-solid interface. The positive temperature gradient at the substrate leads to the formation of a thermocapillary ridge due to an opposing Marangoni stress. This thermocapillary ridge becomes unstable beyond critical parameters related to Marangoni stress and convective energy loss at the free surface. The electroosmotic flow has no effect on the base profile of the film, but enhances its instability. A parameter space is presented delineating the stable and unstable regimes for the film dynamics. 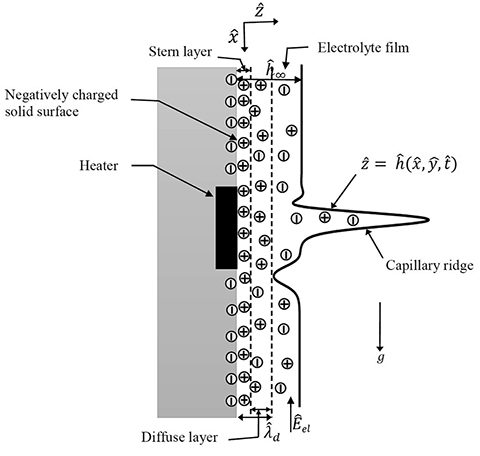