We present new high-resolution experimental data for the temperature behavior of optical birefringence for a series of mixture of the liquid crystals octyloxycyanobiphenyl (8OCB) and nonyloxycyanobiphenyl (9OCB) by using a rotating analyzer technique. The birefringence data have been used to probe the temperature dependence of the nematic order parameter

. We have then arrived at values for possible entropy discontinuities at the nematic-smectic A transition temperature

from the detailed inspection of

data in the immediate vicinity of

. The 9OCB mole fraction dependence of the obtained reduced entropy discontinuities has been shown to be well fitted with a crossover function which is itself consistent with the mean-field free energy expression with a non-zero cubic term arising from the Halperin-Lubensky-Ma (HLM) coupling. The obtained results are in good accordance with existing results from adiabatic scanning calorimetry (ASC). Our birefringence results and determined entropy discontinuities (consistent with calorimetry results) are in striking contrast with the recent birefringence results of Barman et al. (Phase Transit. 91, 58 (2018) published online 16 Aug. 2017) claiming second-order nematic-to-smectic A transitions for all mixtures. In this paper we present a possible explanation for this discrepancy. We have also extracted the effective critical exponent values

exhibits the same power-law divergence as the specific heat capacity. Measurable latent heat values were extracted from optical birefringence data for mole fractions of 9OCB where the

values are as low as 0.2, which is substantially lower than the tricritical value

. This is qualitatively different from what has been observed so far in other liquid-crystal systems. Together with ASC data, these pecuilarities of the 8OCB+9OCB system render further convincing evidence for the presence of the HLM coupling effect at the N-SmA transition phase transition line. 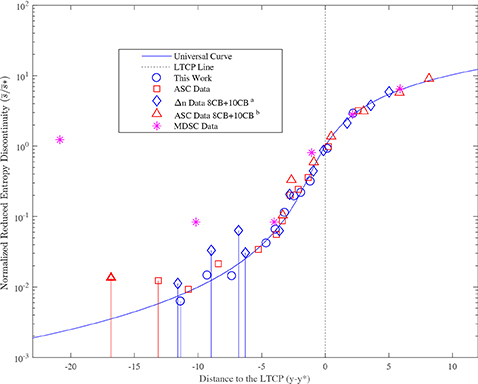