) have been measured throughout the entire nematic (N phase of a binary liquid crystal system comprising of host calamitic compound, 4′-octyloxy-4-cyanobiphenyl (8OCB) and small amount of a hockey stick-shaped mesogen, 4-(3-decyloxyphenyliminomethyl) phenyl 4-decyloxycinnamate (SF7). Two different structural conformations play a significant role in the phase behavior leading to a noticeable shrinkage in the nematic width. During cooling in the nematic phase, both K11 and

enhance monotonically and divulge an evidence of pretransitional fluctuation near the Smectic-A (Sm-A) transition. With increase in the dopant concentration, the slope of the temperature-dependent K11 and

have found to be between that of conventional calamitics and typical bent-core mesogens. Measurement of the temperature-dependent orientational order parameter (〈P 2〉 ) and activation energy (Ea) has also been carried out for all the studied mixtures, exhibiting a small augmentation due to the addition of a hockey stick-shaped compound. This indicates an enhancement in intermolecular packing within the mixtures which further influences the molecular motions. 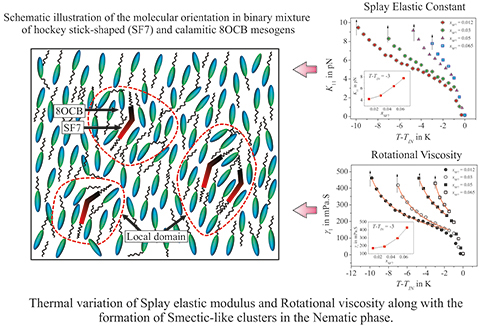