Phase-field modelling of gravity-capillary waves on a miscible interface

Using the approach of direct numerical simulations we investigate the gravity-capillary waves induced on a horizontal interface between two slowly miscible liquids. It is assumed that the liquids are just brought into contact, and thus the interface is slowly smeared by the action of interfacial diffusion. It is also assumed that the initial shape of the interface is distorted by harmonic perturbations, which results in the development of the gravity-capillary surface waves. The evolution of the binary mixture is modelled on the basis of the phase-field method. Our results show that in the limiting case of negligible diffusion the classical dispersion relations for immiscible interfaces can be reproduced. Although, for the waves with shorter wavelengths such an agreement is more difficult to obtain. The interfacial diffusion brings an additional dissipation to the fluid system, strongly damping the development of the shorter waves. We also show that the mixing (or the transition of a binary system to the state of thermodynamic equilibrium) is intensified by the presence of the surface waves, and this effect is more important when the liquids are slowly miscible, i.e. when the interfacial diffusion is weak. 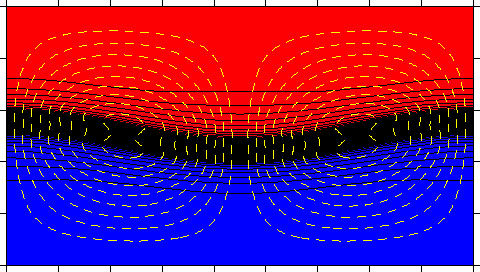