In this paper, we study the influence of the upper gas layer on the drying and gelation of a polymer solution. The gel is formed due to the evaporation of the binary solution into (inert) air. A one-dimensional model is proposed, where the evaporation flux is more realistically described than in previous studies. The approach is based on general thermodynamic principles. A composition-dependent diffusion coefficient is used in the liquid phase and the local equilibrium hypothesis is introduced at the interface to describe the evaporation process. The results show that the high thickness of the gas layer reduces evaporation, thus leading to longer drying times. Our model is also compared with more phenomenological descriptions of evaporation, for which the mass flux through the interface is described by the introduction of a Peclet number. A global agreement is found for appropriate values of the Peclet numbers and our model can thus be considered as a tool allowing to link the value of the empirical Peclet number to the physics of the gas phase. Finally, in contrast with other models, our approach emphasizes the possibility of very fast gelation at the interface, which could prevent all Marangoni convection during the drying process. 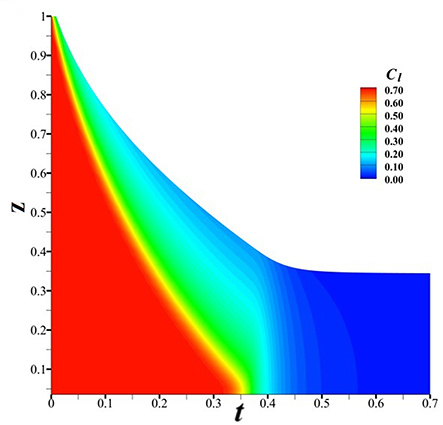