Why granular media are thermal, and quite normal, after all

Two approaches exist to account for granular dynamics: The athermal one takes grains as elementary, the thermal one considers the total entropy that includes microscopic degrees of freedom such as phonons and electrons. Discrete element method (DEM), granular kinetic theory and athermal statistical mechanics (ASM) belong to the first, granular solid hydrodynamics (GSH) to the second one. A discussion of the conceptual differences between both is given here, leading, among others, to the following insights: 1) While DEM and granular kinetic theory are well justified to take grains as athermal, any entropic consideration is far less likely to succeed. 2) In addition to modeling grains as a gas of dissipative, rigid mass points, it is very helpful take grains as a thermal solid that has been sliced and diced. 3) General principles that appear invalid in granular media are repaired and restored once the true entropy is included. These abnormalities (such as invalidity of the fluctuation-dissipation theorem, granular temperatures failing to equilibrate, and grains at rest unable to explore the phase space) are consequences of the athermal approximation, not properties of granular media. 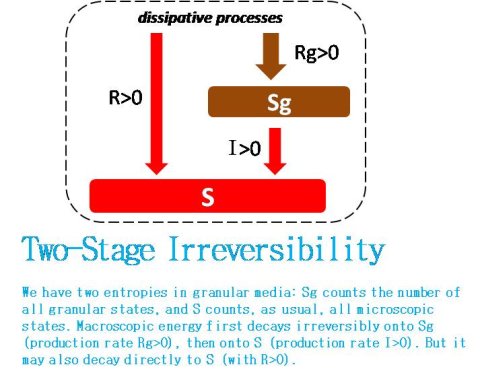