On the vortex dynamics in fractal Fourier turbulence

Incompressible, homogeneous and isotropic turbulence is studied by solving the Navier-Stokes equations on a reduced set of Fourier modes, belonging to a fractal set of dimension D . By tuning the fractal dimension parameter, we study the dynamical effects of Fourier decimation on the vortex stretching mechanism and on the statistics of the velocity and the velocity gradient tensor. In particular, we show that as we move from D = 3 to D ∼ 2.8 , the statistics gradually turns into a purely Gaussian one. This result suggests that even a mild fractal mode reduction strongly depletes the stretching properties of the non-linear term of the Navier-Stokes equations and suppresses anomalous fluctuations. 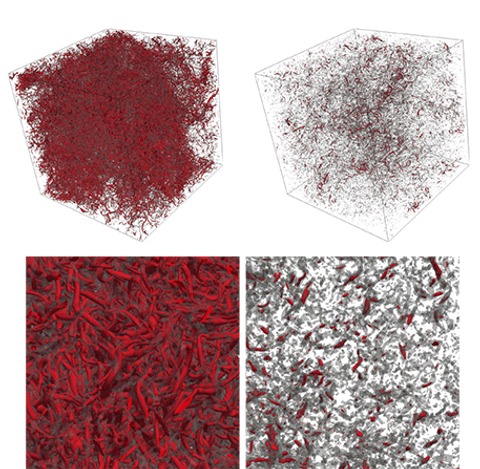