Phase and precession evolution in the Burgers equation

We present a phenomenological study of the phase dynamics of the one-dimensional stochastically forced Burgers equation, and of the same equation under a Fourier mode reduction on a fractal set. We study the connection between coherent structures in real space and the evolution of triads in Fourier space. Concerning the one-dimensional case, we find that triad phases show alignments and synchronisations that favour energy fluxes towards small scales --a direct cascade. In addition, strongly dissipative real-space structures are associated with entangled correlations amongst the phase precession frequencies and the amplitude evolution of Fourier triads. As a result, triad precession frequencies show a non-Gaussian distribution with multiple peaks and fat tails, and there is a significant correlation between triad precession frequencies and amplitude growth. Links with dynamical systems approach are briefly discussed, such as the role of unstable critical points in state space. On the other hand, by reducing the fractal dimension D of the underlying Fourier set, we observe: i) a tendency toward a more Gaussian statistics, ii) a loss of alignment of triad phases leading to a depletion of the energy flux, and iii) the simultaneous reduction of the correlation between the growth of Fourier mode amplitudes and the precession frequencies of triad phases. 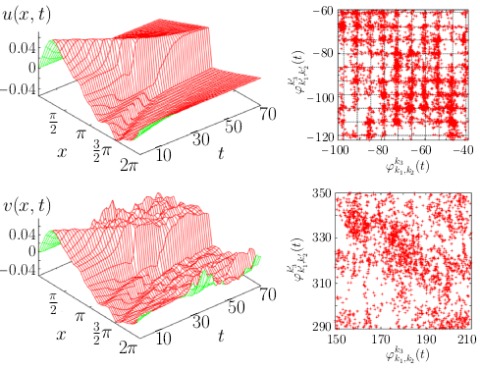