A hydrostatically stressed soft elastic film circumvents the imposed constraint by undergoing a morphological instability, the wavelength of which is dictated by the minimization of the surface and the elastic strain energies of the film. While for a single film, the wavelength is entirely dependent on its thickness, a co-operative energy minimization dictates that the wavelength depends on both the elastic moduli and thicknesses of two contacting films. The wavelength can also depend on the material properties of a film if its surface tension has a pronounced effect in comparison to its elasticity. When such a confined film is subjected to a continually increasing normal displacement, the morphological patterns evolve into cracks, which, in turn, govern the adhesive fracture behavior of the interface. While, in general, the thickness provides the relevant length scale underlying the well-known Griffith-Kendall criterion of debonding of a rigid disc from a confined film, it is modified non-trivially by the elasto-capillary number for an ultra-soft film. Depending upon the degree of confinement and the spatial distribution of external stress, various analogs of the canonical instability patterns in liquid systems can also be reproduced with thin confined elastic films. 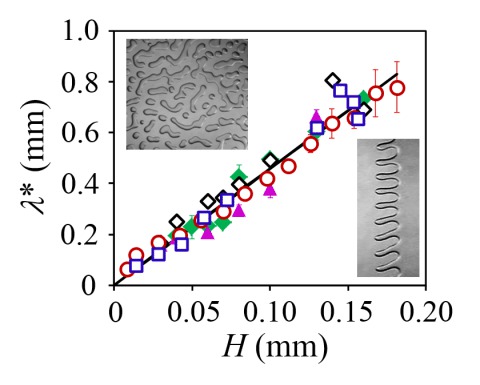