We report experimental observations of the mechanical effects of light on ellipsoidal micrometre-sized dielectric particles, in water as the continuous medium. The particles, made of polystyrene, have shapes varying between near disk-like (aspect ratio k = 0.2 to very elongated needle-like (k = 8 . Rather than the very tightly focused beam geometry of optical tweezers, we use a moderately focused laser beam to manipulate particles individually by optical levitation. The geometry allows us varying the longitudinal position of the particle, and to capture images perpendicular to the beam axis. Experiments show that moderate-k particles are radially trapped with their long axis lying parallel to the beam. Conversely, elongated (k > 3 or flattened (k < 0.3 ellipsoids never come to rest, and permanently “dance” around the beam, through coupled translation-rotation motions. The oscillations are shown to occur in general, be the particle in bulk water or close to a solid boundary, and may be periodic or irregular. We provide evidence for two bifurcations between static and oscillating states, at k ≈ 0.33 and k ≈ 3 for oblate and prolate ellipsoids, respectively. Based on a recently developed 2-dimensional ray-optics simulation (Mihiretie et al., EPL 100, 48005 (2012)), we propose a simple model that allows understanding the physical origin of the oscillations. 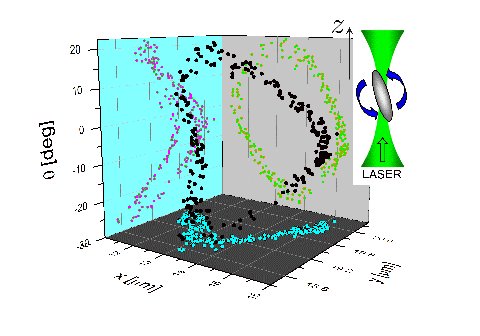