Dip-coating of a chemically micropatterned surface is an important technique for selective material deposition in a confined region for various applications. An analysis of the dip-coating of a micropatterned surface with a pure Newtonian liquid was performed by Davis (Phys. Fluids 17, 03852 (2005)). In this study, the analysis of dip-coating of the heterogeneous substrate is extended to the deposition of an Ellis Fluid. Governing equations are derived using lubrication theory to determine the thickness of a liquid film deposited on the O(10 μm) stripe at small capillary number. A uniformly wetting surface is also considered using a consistent treatment of the governing equations for comparison. The effect of the Ellis model parameters on the thickness of the entrained liquid film is found to be much less for the micropatterned surfaces because of the dominant effect of the lateral fluid confinement due to heterogeneous wettability. This confinement imposes a geometric length scale in case of the patterned surface that replaces the dynamic capillary length used for the analysis of the dip-coating of a uniform surface. A composite equation is further developed for the Ellis fluid to include the effect of gravity on the dip-coated film thickness on both types of surfaces. The film thinning due to gravity drainage is found to be negligible for the case of patterned substrate. 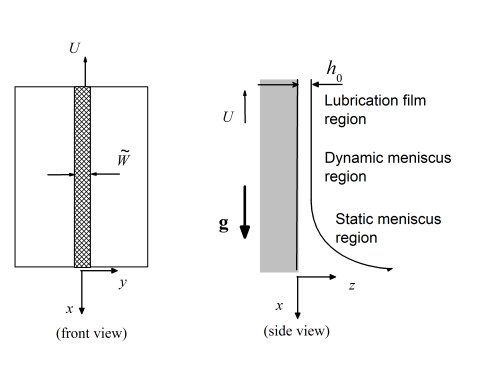