We report numerical calculations on the mechanical effects of light on micrometer-sized dielectric ellipsoids immersed in water. We used a simple two-dimensional ray-optics model to compute the radiation pressure forces and torques exerted on the object as a function of position and orientation within the laser beam. Integration of the equations of motion, written in the Stokes limit, yields the particle dynamics that we investigated for different aspect ratios k . Whether the beam is collimated or focused, the results show that above a critical aspect ratio kC, the ellipsoids cannot be stably trapped on the beam axis; the particle never comes to rest and rather oscillates permanently in a back-and-forth motion involving both translation and rotation in the vicinity of the beam. Such oscillations are a direct evidence of the non-conservative character of optical forces. Conversely, stable trapping can be achieved for k < k C with the particle standing idle in a vertical position. These predictions are in very good qualitative agreement with experimental observations. The physical origin of the instability may be understood from the force and torque fields whose structures greatly depend on the ellipsoid aspect ratio and beam diameter. The oscillations arise from a non-linear coupling of the forces and torques and the torque amplitude was identified as the bifurcation control parameter. Interestingly, simulations predict that sustained oscillations can be suppressed through the use of two coaxial counterpropagating beams, which may be of interest whenever a static equilibrium is required as in basic force and torque measurements or technological applications. 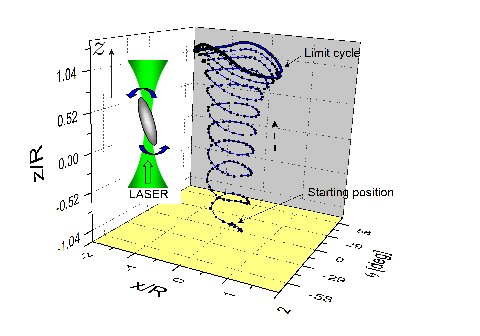