Single-molecule pulling experiments are widely used for studying the structure, dynamics, and function of single biological molecules via applying mechanical forces on them in a controlled way. Pulling at a constant speed or at a constant force builds up a mechanical force on a molecule or molecular complex leading to a molecular transition such as the dissociation of a molecular complex, unfolding of a protein, or unwrapping of a higher-order structure. We perform Brownian dynamics and Monte Carlo simulations of single-molecule pulling experiments. Through our simulations we demonstrate that the molecular transition rate based on the Kramers theory in the high-barrier limit becomes unsuitable as the applied force approaches the critical force at which the barrier disappears. We also demonstrate that use of molecular transition rate based on mean first passage time (MFPT) approach would be more relevant in describing molecular transition especially as the applied force approaches the critical force. 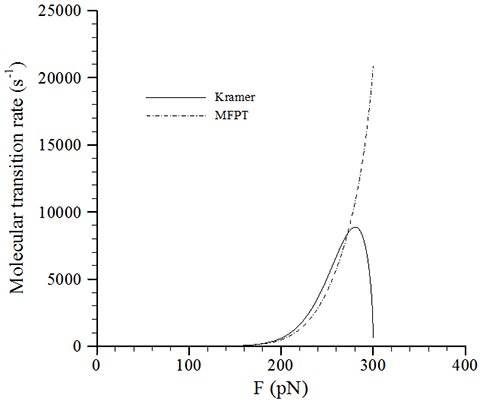