Optical microscopy is used to study the effect of lamellar order on the evolution of polymer-melt bridges. Measurements are performed on symmetric diblock copolymers and linear homopolymers in the melt state. Diblock copolymer bridges measured in the disordered phase are shown to exhibit the same strain rate response as their homopolymer counterparts: shear thinning at low strain rates and shear thickening at high strain rates. However, when measured in the ordered phase, copolymer-melt bridges demonstrate an increased effective viscosity due to the lamellar order and a shear thinning response over the entire range of strain rates probed. The increased viscosity demonstrates an enhanced stability in lamellae forming diblock liquid bridges, presumed to be caused by the isotropic orientational order of lamellar domains that provide energy barriers to flow within the bridge. The shear thinning can be understood as an alignment of lamellae along the axis of the bridge due to flow, facilitating unimpeded diffusion of polymer out of the liquid bridge along lamellar boundaries. 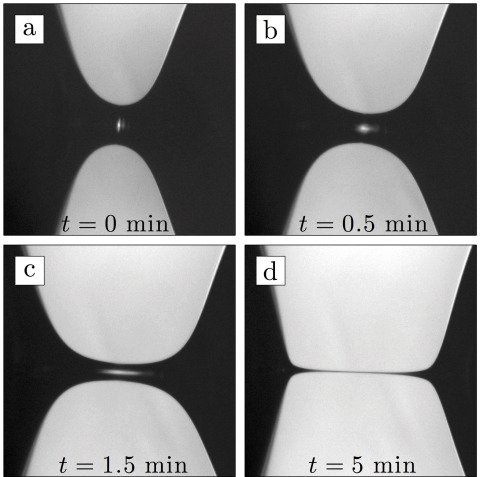