Constitutive equations for a one-dimensional, active, polar, viscoelastic liquid are derived by treating the strain field as a slow hydrodynamic variable. Taking into account the couplings between strain and polarity allowed by symmetry, the hydrodynamics of an active, polar, viscoelastic body include an evolution equation for the polarity field that generalizes the damped Kuramoto-Sivashinsky equation. Beyond thresholds of the active coupling coefficients between the polarity and the stress or the strain rate, bifurcations of the homogeneous state lead first to stationary waves, then to propagating waves of the strain, stress and polarity fields. I argue that these results are relevant to living matter, and may explain rotating actomyosin rings in cells and mechanical waves in epithelial cell monolayers. 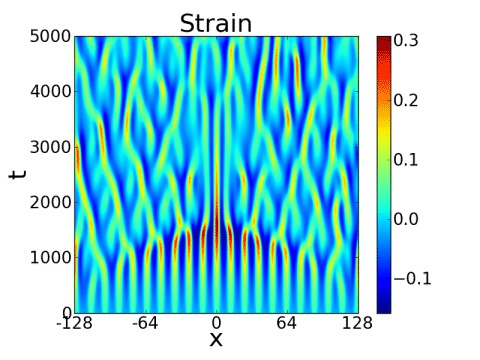