Active force maintains the stability of a contractile ring

We investigate a system of sufficiently dense polar actin filaments considered rigid and cross-linked by dimer myosin II protein within the contractile ring. The Langevin dynamics of this system is cast in a functional integral formalism and then transformed into density variables. Using the dynamical Random Phase Approximation (RPA) along with the a one-dimensional Langevin dynamics simulation (LDS), we investigate the structural integrity of the actin bundle network. The active force and the networking force reveal a non-trivial diffusive behaviour of the filaments within the ring. We conclude on when the active and networking forces lead to the contractile ring breaking down. The non-equilibrium active force is predominantly responsible for the prevention of the gaps in the ring. 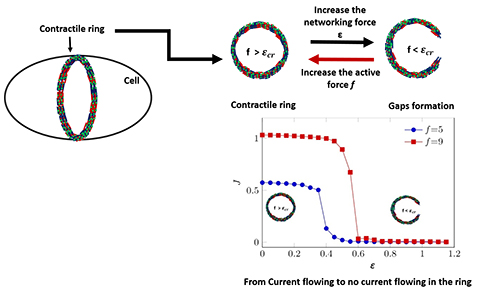