We performed Monte Carlo simulation of the detachment of a polymorphonuclear (PMN) leukocyte immersed in a Newtonian fluid and adhered to a substrate by multiple catch-slip bonds. We found that at certain loading rates the interplay of multiple catch-slip bonds leads to a bimodal distribution of the bond rupture force. We also found that the low force peak in these bond rupture force distributions switches to a high force peak with a gradual increase in the loading rate. These trends in the bond rupture force distributions are characteristics of two-state systems. Consequently, though individual catch-slip bonds follow one-state two-pathway energy landscape, their interplay mimics a two-state two-pathway energy landscape. 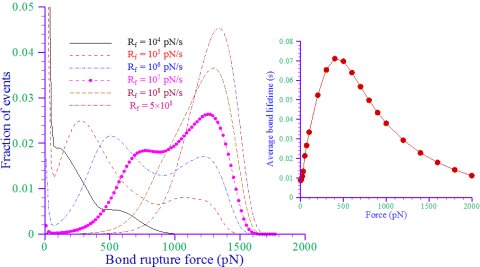