There have been recent reports of continuous rotation of chiral nematic droplets in restricted ranges of diameter/pitch (d /p) values, trapped by a linearly polarized laser beam. We have developed a simple model to calculate the distortion in the helical structure of a set of flat layers, caused by the action of the strong electric field of the propagating laser beam on the dielectric anisotropy of the medium. The resulting change in the polarization state of the beam passing through the sample is then used to calculate the torque on the sample as a function of the azimuthal angle of the first layer. The main results are: i) the torque tends to zero even with circularly polarized beam for samples with thicknesses around integral multiples of 0.5p ; ii) the undistorted sample takes an equilibrium orientation for linearly polarized beam, which jumps by

/2 rad at the same sample thicknesses; iii) these samples will have a nonzero torque at all azimuthal angles of the first slice when the helical structure is distorted by the linearly polarized beam. The calculations show that a propagating accordion mode, in which the helical pitch alternately expands and contracts, gives rise to the nonzero torque. The theoretical predictions are in broad agreement with experimental results. 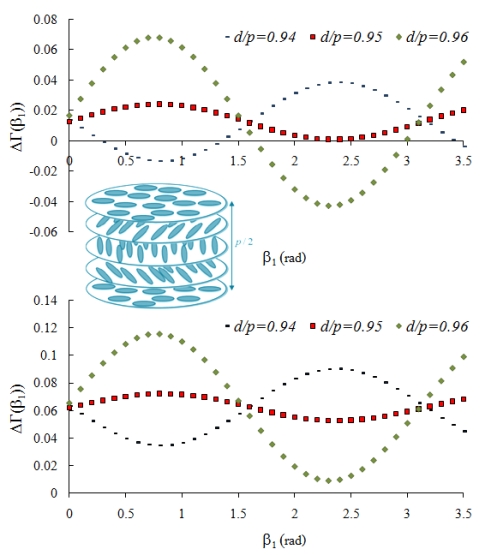