Sharp diffusion front in diffusion problem with change of state

We propose an alternative model of diffusion in polymers, which may explain formation of propagating sharp diffusion fronts to be observed in some experiments. Differently from typical Case II or Stefan problem models, plasticisation of the polymer matrix is not necessarily required. Instead, diffusing small molecules are assumed to be captured by some specific sites of the polymer matrix for certain retention times. For example, they may become adsorbed at the surface of the holes and microvoids that are considered to be present in glassy polymer regions according to the well-known dual-sorption model and are attributed to excess free volume frozen into the glassy matrix. On the other hand, the small molecules may become bound to polymer chains. In this adsorbed/bound state they have much smaller movability and thus are effectively excluded from the diffusion. This adsorption/binding is considered to be a reversible process of state changing, but with asymmetric probabilities for direct and reverse events. With this assumption, taking into account that the amount of space available for such immobilised molecules is limited (limited free volume, limited number of anchoring sites) the model naturally results in the formation of sharp diffusion fronts or strong concentration gradients. Such a diffusion front is a region of effective immobilisation (adsorption/binding, though reversible) of the free diffusing molecules. For the simplest prescribed boundary conditions the diffusion front propagates linearly with the square root of time. By means of imposing generalised boundary conditions, it is possible to model other regimes of propagation of the diffusion front, including constant velocity. 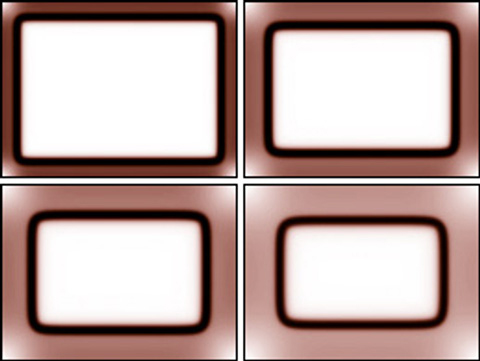