This paper investigates the explosively driven dynamics of dry and wet sand. Contrary to popular belief, wet sand under high strain rate loadings (104s-1) is observed to have reduced resistance against flow compared to the dry sand, which is supported by a noticeably enhanced expansion before the breakup followed by an increased number of fragments. Even a small amount of interstitial oil (3.2wt.%) suffices to substantially reduce the size of fragments whose average mass only amounts to 60% of the mass of the dry sand fragments. To predict the instability onset of the expanding sand shell, a kinetic instability model is proposed based on an instability criterion involving the opposing forces of stabilizing inertial pressures and destabilizing viscous resistance. The interstitial oil leads to a smaller viscous resistance of wet sand by the lubrication effect as well as lessening the degree of shock compaction. The dominance of viscous resistance thus commences later for the wet sand shell until a smaller thickness allows the inertial forces to be overtaken. Moreover, multi-shear localizations rather than interface instability are identified as the dominant mechanism for the instability onset of the expanding sand shells. 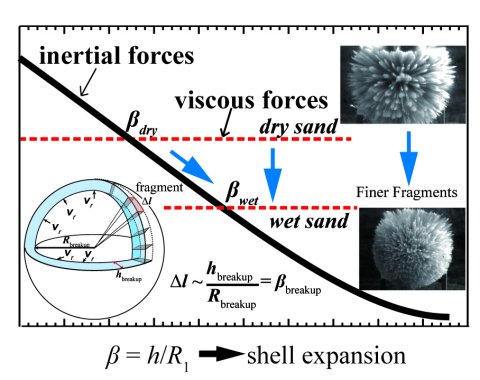