Granular materials subjected to blast loading caused by a central explosion exhibit a distinctive dual jetting phenomenon. A large number of fine particle jets are ejected from the outer edge of the charge upon the reflection of the shock wave from the free surface, and are soon overtaken and overlapped by a second set of much thicker particle jets from the inner edge. Our numerical studies suggest that these two distinct sets of particle jets arise from a subsequent fragmentation of the outer and inner particle layers formed during shock interaction. The instability onset of the inner particle layer, which remains intact after the spallation of the outer particle layer, corresponds to the destabilizing viscous forces prevailing over the stabilizing inertial forces. The physical mechanism responsible for the spallation of the outer particle layer is accounted for by a three-phase cavitation model consisting of nucleation, unconditioned and conditioned growth of voids. The theoretically predicted fragmentation onset and fragment size are well consistent with the experimental results. Moreover, by incorporating the moisture effect into the granular material model, results of the cavitation model indicate an increased number of jets generated by saturated particles, as observed in experiments. With minor shock energy being consumed on the saturated particle compaction thanks to the remarkably low compressibility of saturated particles, the shock wave retains the steep front during propagation and subsequently produces a sharp reflection wave leading to a considerably higher strain relaxation rate in saturated particles than that in dry particles. The pressure relaxation duration prescribes the time the activated nucleation sites are allowed to communicate with each other. Consequently nucleation sites in saturated particles have more chances to survive and fully develop than those in dry particles giving rise to smaller fragments. 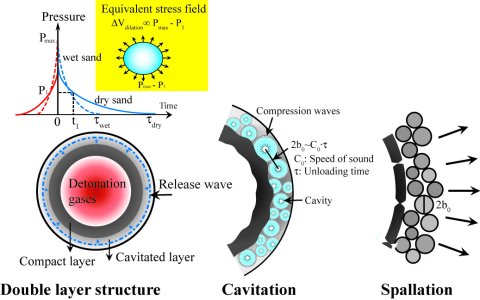