We report on the first dynamic study of acoustical spring effect in a compliant cavity formed between a spherical ultrasonic transducer immersed in water and the free liquid surface located at its focus. As its optical analog, this effect is due to the mutual feedback between the cavity length L and the large acoustical power stored inside the cavity, here through acoustic radiation pressure. We use surface waves to investigate the acoustical spring effect. The amplitude of surface waves above the cavity is observed to vary with the slope of variation of the L -dependent acoustic radiation pressure exerted on the liquid surface, i.e. with the acoustic spring stiffness. The observed simultaneous back-scattering of these surface waves demonstrates that the surface response to the cavity length variations results mainly in an added stiffness, i.e., in an increase of the real part of the surface impedance above the cavity. Finally, when the liquid surface is located out of the focal plane, spontaneous surface oscillations are reproducibly observed, which may be due to a parametric instability. 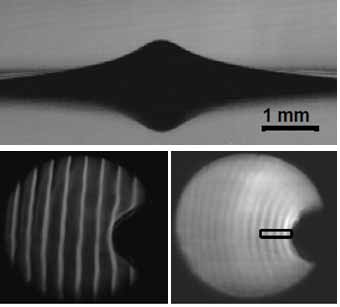