Daniel Salgado-Blanco and Carlos I. Mendoza*

The self-assembly of core-corona discs interacting via anisotropic potentials is investigated using Monte Carlo computer simulations. A minimal interaction potential that incorporates anisotropy in a simple way is introduced. It consists in a core-corona architecture in which the center of the core is shifted with respect to the center of the corona. Anisotropy can thus be tuned by progressively shifting the position of the core. Despite its simplicity, the system self-organizes in a rich variety of structures including stripes, triangular and rectangular lattices, cluster crystals, unusual plastic crystals, and geometrically frustrated phases. Our results indicate that the amount of anisotropy does not alter the lattice spacing and only influences the type of clustering (stripes, micelles, etc.) of the individual particles. 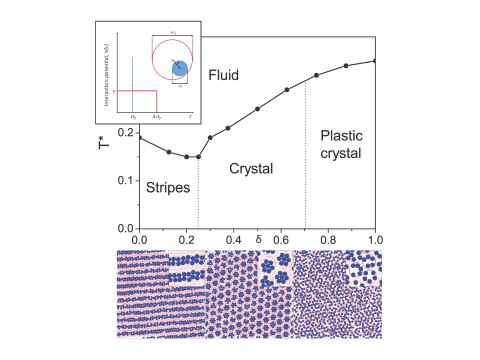