We reanalysed the role of superparamagnetic magnetite clusters observed in a pigeon’s upper beak to decide if this matter can be a component of some sort of pigeon magnetometer for Earth orientation. We investigated the mutual interaction of the magnetite clusters induced by the geomagnetic field. The force sensitivity of the hypothetical magnetometer in a pigeon’s upper beak was estimated considering the previously presented threshold magnetic sensitivity of pigeons, measured in electrophysiological and behavioural investigations. The typical intercluster magnetic force seems to be 10−19N well above the threshold magnetic sensitivity. To strengthen our results, we measured the magnetic susceptibility of superparamagnetic magnetite using a vibrating sample magnetometer. Finally we performed theoretical kinematic analysis of the motion of magnetite clusters in cell plasma. The results indicate that magnetite clusters, constituted by superparamagnetic nanoparticles and observed in a pigeon’s upper beak, may not be a component of a measuring system providing the magnetic map. 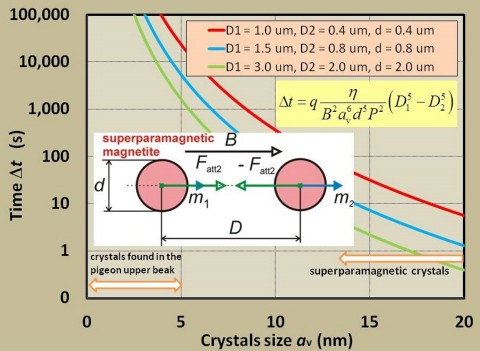