Digital Image Correlation is used to study the micromechanics of a multi-contact interface formed between a rough elastomer and a smooth glass surface. The in-plane elastomer deformation is monitored during the incipient sliding regime, i.e. the transition between static and sliding contact. As the shear load is increased, an annular slip region, in coexistence with a central stick region, is found to progressively invade the contact. From the interfacial displacement field, the tangential stress field can be further computed using a numerical inversion procedure. These local mechanical measurements are found to be correctly captured by Cattaneo and Mindlin (CM)'s model. However, close comparison reveals significant discrepancies in both the displacement and stress fields that reflect the oversimplifying hypothesis underlying CM's scenario. In particular, our optical measurements allow us to exhibit an elasto-plastic-like friction constitutive equation that differs from the rigid-plastic behavior assumed in CM's model. This local constitutive law, which involves a roughness-related length scale, is consistent with the model of Bureau et al. (Proc. R. Soc. London, Ser. A 459, 2787 (2003)) derived for homogeneously loaded macroscopic multi-contact interfaces, thus extending its validity to mesoscopic scales. 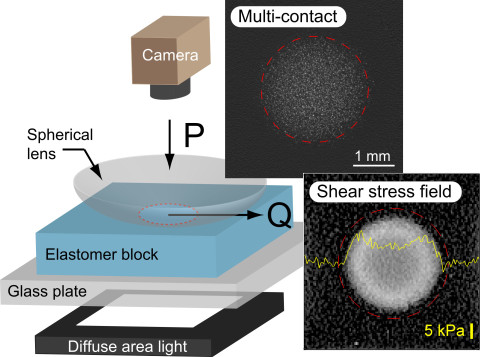