Mesoscopic models for DNA stretching under force: New results and comparison with experiments

Single-molecule experiments on double-stranded B-DNA stretching have revealed one or two structural transitions, when increasing the external force. They are characterized by a sudden increase of DNA contour length and a decrease of the bending rigidity. The nature and the critical forces of these transitions depend on DNA base sequence, loading rate, salt conditions and temperature. It has been proposed that the first transition, at forces of 60–80 pN, is a transition from B to S-DNA, viewed as a stretched duplex DNA, while the second one, at stronger forces, is a strand peeling resulting in single-stranded DNAs (ssDNA), similar to thermal denaturation. But due to experimental conditions these two transitions can overlap, for instance for poly(dA-dT). In an attempt to propose a coherent picture compatible with this variety of experimental observations, we derive an analytical formula using a coupled discrete worm-like chain-Ising model. Our model takes into account bending rigidity, discreteness of the chain, linear and non-linear (for ssDNA) bond stretching. In the limit of zero force, this model simplifies into a coupled model already developed by us for studying thermal DNA melting, establishing a connection with previous fitting parameter values for denaturation profiles. Our results are summarized as follows: i) ssDNA is fitted, using an analytical formula, over a nano-Newton range with only three free parameters, the contour length, the bending modulus and the monomer size; ii) a surprisingly good fit on this force range is possible only by choosing a monomer size of 0.2 nm, almost 4 times smaller than the ssDNA nucleobase length; iii) mesoscopic models are not able to fit B to ssDNA (or S to ss) transitions; iv) an analytical formula for fitting B to S transitions is derived in the strong force approximation and for long DNAs, which is in excellent agreement with exact transfer matrix calculations; v) this formula fits perfectly well poly(dG-dC) and λ-DNA force-extension curves with consistent parameter values; vi) a coherent picture, where S to ssDNA transitions are much more sensitive to base-pair sequence than the B to S one, emerges. This relatively simple model might allow one to further study quantitatively the influence of salt concentration and base-pairing interactions on DNA force-induced transitions. 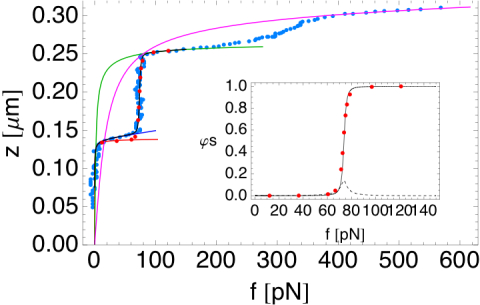