Elasticity of DNA and the effect of dendrimer binding

Negatively charged DNA can be compacted by positively charged dendrimers and the degree of compaction is a delicate balance between the strength of the electrostatic interaction and the elasticity of DNA. We report various elastic properties of short double-stranded DNA (dsDNA) and the effect of dendrimer binding using fully atomistic molecular dynamics and numerical simulations. In equilibrium at room temperature, the contour length distribution P(L) and the end-to-end distance distribution P(R) are nearly Gaussian, the former gives an estimate of the stretch modulus

of dsDNA in quantitative agreement with the literature value. The bend angle distribution

of the dsDNA also has a Gaussian form and allows to extract a persistence length, Lp of 43nm. When the dsDNA is compacted by positively charged dendrimer, the stretch modulus stays invariant but the effective bending rigidity estimated from the end-to-end distance distribution decreases dramatically due to backbone charge neutralization of dsDNA by dendrimer. We support our observations with numerical solutions of the worm-like-chain (WLC) model as well as using non-equilibrium dsDNA stretching simulations. These results are helpful in understanding the dsDNA elasticity at short length scales as well as how the elasticity is modulated when dsDNA binds to a charged object such as a dendrimer or protein. 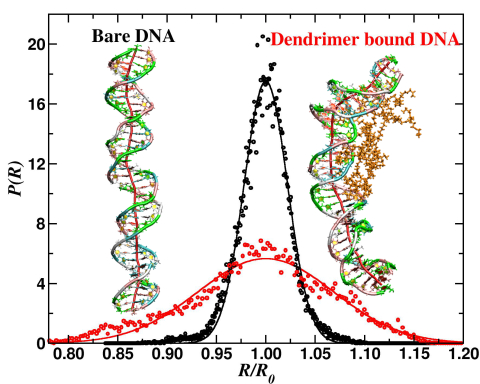