Surfactant-loaded capsules as Marangoni microswimmers at the air–water interface: Symmetry breaking and spontaneous propulsion by surfactant diffusion and advection

We present a realization of a fast interfacial Marangoni microswimmer by a half-spherical alginate capsule at the air–water interface, which diffusively releases water-soluble spreading molecules (weak surfactants such as polyethylene glycol (PEG)), which act as “fuel” by modulating the air–water interfacial tension. For a number of different fuels, we can observe symmetry breaking and spontaneous propulsion although the alginate particle and emission are isotropic. The propulsion mechanism is similar to soap or camphor boats, which are, however, typically asymmetric in shape or emission to select a swimming direction. We develop a theory of Marangoni boat propulsion starting from low Reynolds numbers by analyzing the coupled problems of surfactant diffusion and advection and fluid flow, which includes surfactant-induced fluid Marangoni flow, and surfactant adsorption at the air–water interface; we also include a possible evaporation of surfactant. The swimming velocity is determined by the balance of drag and Marangoni forces. We show that spontaneous symmetry breaking resulting in propulsion is possible above a critical dimensionless surfactant emission rate (Peclet number). We derive the relation between Peclet number and swimming speed and generalize to higher Reynolds numbers utilizing the concept of the Nusselt number. The theory explains the observed swimming speeds for PEG–alginate capsules, and we unravel the differences to other Marangoni boat systems based on camphor, which are mainly caused by surfactant evaporation from the liquid–air interface. The capsule Marangoni microswimmers also exhibit surfactant-mediated repulsive interactions with walls, which can be qualitatively explained by surfactant accumulation at the wall. 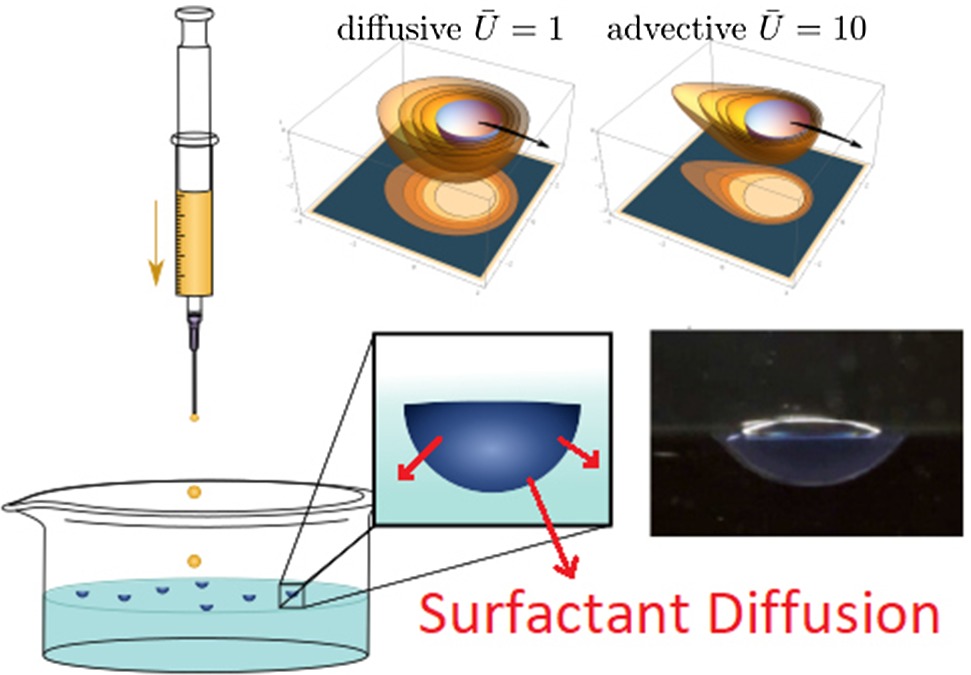