The theory of the effect of external fluctuations on the stability and spatial distribution of mutually interacting and slowly evaporating charged drops, levitated in an electrodynamic balance, is presented using a classical pseudo-potential approach. The theory is supplemented with numerical simulations where the non-homogeneous modified Mathieu equation is solved for single-droplet as well as many-droplet systems. In this essentially non-equilibrium system a pseudo-potential is identified, and a Boltzmann-like pseudo-equilibrium distribution is suggested that describes the variance of the deterministic configuration of particles levitated in a quadrupolar trap. This formalism seems to explain the numerical results in a fairly close and convincing manner. A transition from a well-ordered Coulombic crystal to a randomly distributed liquid-like structure is observed above a threshold value of noise. A surprising finding of the present work is the observation that the strength of the threshold noise for the transition of a 2-particle system into a noise-dominated regime is identical to the critical noise required for a solid melting transition in a 100-particle system. The simulations could prove useful in analysing an ordered assembly of levitated micro- and nano-particles from the air streams using a contactless membrane. 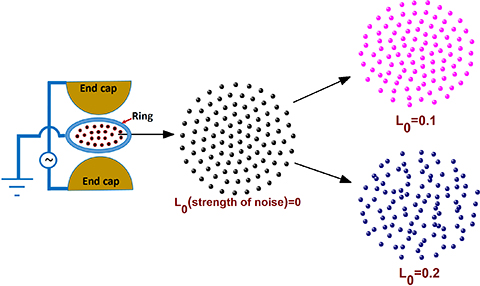