Nonlinear regimes of the Soret-induced convection of a ternary mixture in a rectangular cavity with the vertical heat flux at the boundaries are studied numerically. Linear stability analysis performed earlier for a plane horizontal layer has shown that in a wide range of parameters the longwave instability is dominant. Nonlinear calculations performed in the present work for the parameter ranges where the monotonic longwave instability is dominant according to the linear stability analysis, show that at large supercriticalities the multi-vortex stationary flows could be realized. With the decrease of absolute value of the Rayleigh number Ra the series of flow structure transformations takes place. This transformation is accompanied by the decrease of a number of the vortices such that near the threshold the flow becomes two-vortex, i.e. the flow with maximum possible wavelength (minimum possible wave number) is realized. Thus, the nonlinear calculations confirm the conclusions of the linear stability analysis that the longwave instability is dominant. For the parameter ranges where according to the linear stability analysis the oscillatory longwave instability is dominant, the nonlinear calculations show that at small values of the net separation ratio the oscillatory regimes could be observed just in a narrow range of Ra close to the convection threshold and with the growth of net separation ratio the range of Ra where they can be observed is extended. 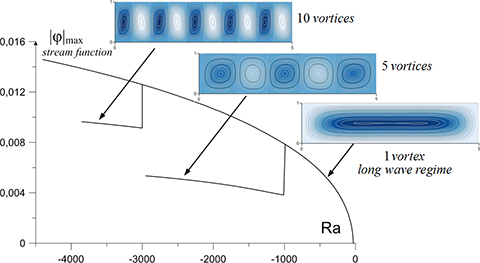