Breakup of finite-size liquid filaments: Transition from no-breakup to breakup including substrate effects⋆

This work studies the breakup of finite-size liquid filaments, when also including substrate effects, using direct numerical simulations. The study focuses on the effects of three parameters: Ohnesorge number, the ratio of the viscous forces to inertial and surface tension forces, the liquid filament aspect ratio, and where there is a substrate, a measure of the fluid slip on the substrate, i.e. slip length. Through these parameters, it is determined whether a liquid filament breaks up during the evolution toward its final equilibrium state. Three scenarios are identified: a collapse into a single droplet, the breakup into one or multiple droplets, and recoalescence into a single droplet after the breakup (or even possibly another breakup after recoalescence). The results are compared with the ones available in the literature for free-standing liquid filaments. The findings show that the presence of the substrate promotes the breakup of the filament. The effect of the degree of slip on the breakup is also discussed. The parameter domain regions are comprehensively explored when including the slip effects. An experimental case is also carried out to illustrate the collapse and breakup of a finite-size silicon oil filament supported on a substrate, showcasing a critical length of the breakup in a physical configuration. Finally, direct numerical simulations reveal striking new details into the breakup pattern for low Ohnesorge numbers, where the dynamics are fast and the experimental imaging is not available; our results therefore significantly extend the range of Ohnesorge number over which filament breakup has been considered. 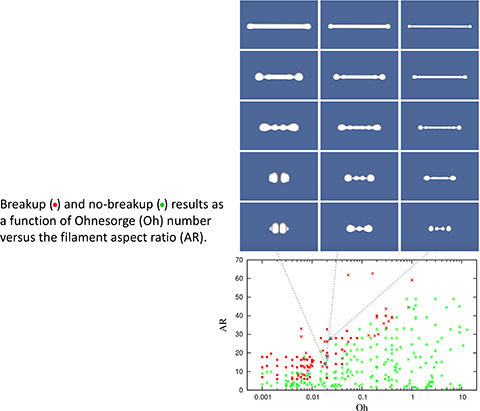