We numerically investigate the force-displacement relation of a moving intruder initially at rest into a granular medium. Our model granular medium is composed of one layer of coplanar polydisperse spheres subjected to a gravity field. The interactions between the grains are modelled by Hertzian contacts to which a viscous damping is applied. Moving it horizontally and with alternating positive and negative velocity, we recover a hysteresis of the force-displacement curve. Considering that the flow is plastic as the yield strength has been reached, we describe the transient part of the flow around the intruder. We show that the drag stress increases as its distance to an ultimate drag stress

with a typical deformation 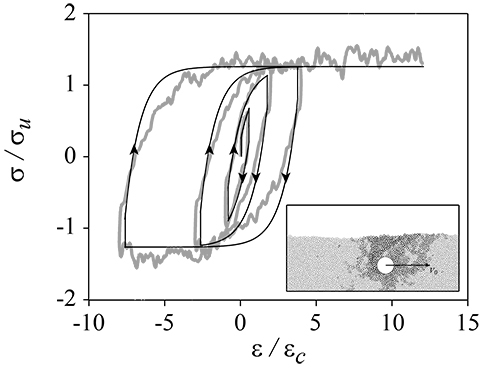