Divalent ions, in particular calcium ions, constitute important macroelements in living organisms. They are also found in cell membranes, i.e., ensuring their stabilization or participating in synaptic transmission of nerve impulses. The aim of this work is to describe the interactions of divalent ions, such as Ca2+, Ba2+, and Sr2+, in electrolytes with the functional groups on the surface of liposomes formed from phosphatidylcholine (PC). Microelectrophoresis is used to determine the surface charge density as a function of pH. The interactions between ions found in solution and the functional groups of PC are described with the use of a seven-equilibrium mathematical model. Using this model along with experimental data on the charge density of the membrane surface, the association constants characterizing this equilibrium are determined. These parameters are used to calculate the theoretical model curves. The validity of the proposed model is confirmed by comparing the theoretically calculated changes in charge density on the liposome surface with the experimental results. 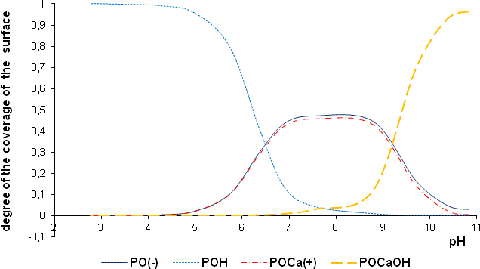