In this paper, we characterized the interactions between two-component liposomal membranes and monovalent electrolyte ions. Liposomes were formed from neutral (phosphatidylcholine) and anionic (phosphatidylglycerol) lipids mixed in various ratios. Microelectrophoresis was used to determine the dependence of the membrane surface charge density on the p H of the electrolyte solution. Changes in the membrane electric charge caused by the adsorption of Na+ , Cl- , H+ , and OH- ions were observed, and the equilibria among these ions and the phosphatidylcholine-phosphatidylglycerol membrane surface were quantified. We proposed a mathematical model for characterizing these equilibria. Using this model, together with experimental data of the membrane surface charge density, we determined association constants characterizing the equilibria. Knowledge of these parameters was necessary to calculate the theoretical curves of the model. We validated the model by curve-fitting the experimental data points to simulated data generated by the model. 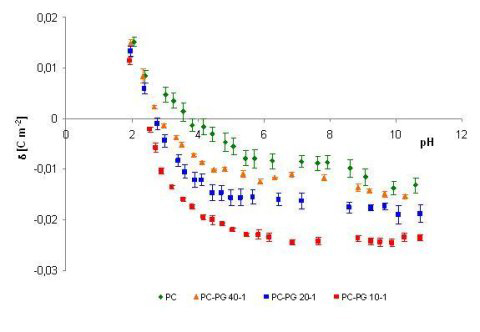