The curvature changes induced by grafted polymers in microemulsions

The results on Winsor phases, droplet and bicontinous microemulsions phases with polymer-grafted lipids studied by Small Angle Neutron Scattering (SANS) are reported below, together with the contrast variation techniques used to characterize the average curvature in the system. We have clearly shown that polymer-grafted lipids change the interaction between microemulsion droplets --it need not be just repulsive but could also be attractive. They induce structural changes or bring about complete phase changes as observed visually in the Winsor phases when added in sufficient amounts. In the bicontinous microemulsion phases, the polymer-grafted lipids decrease the persistence length, hence the bending rigidity, increase the apparent average thickness of the film, and cause a complex deformation of the film which brings about a negative curvature change at a semi-local scale. Contrary to the naive prediction that the polymer-grafted lipids should increase membrane rigidity our experiments show a decrease. This is a subtle effect caused by perhaps an indirect coupling between film curvature and concentration fluctuations. 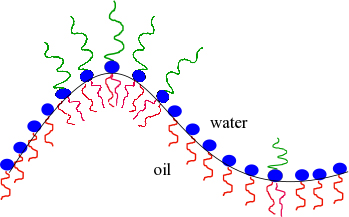