Selective permeability is a key feature of biological membranes. It is controlled by the physico-chemical properties of the lipid bilayer and by channel-forming membrane proteins. Here we focus on the permeation of small molecules across channel-forming proteins in Gram-negative bacteria called porins and present a new approach based on artificial amino acids. We introduced Hco, a fluorescent amino acid with characteristic excitation and emission wavelengths, into OmpF and measured FRET from Hco to dissolved Bocillin FL using solubilized OmpF porins. We examined four variants of OmpF and by doing so, we were able to show that small molecules, like Bocillin FL, are remaining long enough in the porin in order to undergo FRET and produce a reproducible fluorescence signal. This finding opens the way to quantify translocation in the future by the simultaneous detection of resistive pulses and differential fluorescence with FRET as an example. 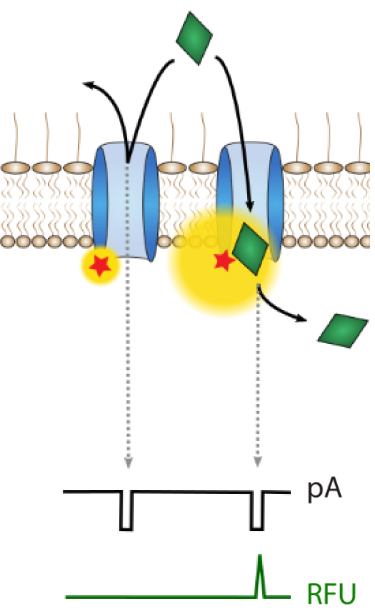