A two-dimensional drop sliding down a plate under the action of gravity is numerically studied. A lattice Boltzmann method coupled with the phase field method is utilized, which can well capture the motion of the three-phase contact line. The morphologies of the sliding drop and corresponding force balance during the process are considered. It is found that there are two basic sliding modes of the drop with various gravitational and viscous effects. The viscous shear stress (

from the wall acts on the bottom of the drop, and it is divided in two parts. One is in the contact line region, and the other on the rest part of the solid-liquid interface (contacting area). The former one appears as

-peaks, which are purely determined by the intrinsic contact angle (

and sliding speed. They are very local. When the gravity is small, the drop slides down very slowly, and such shear force can balance the gravity. Meanwhile, the shape of the droplet can be interestingly characterized as a “pendant drop”. When the gravity increases, an additional shear force is generated mainly due to the appearing of a trail at the rear part of the drop. The de-wetting failure condition makes the sliding velocity almost constant in this regime. The present study is also valuable to understand the physics of three-dimensional drop sliding. 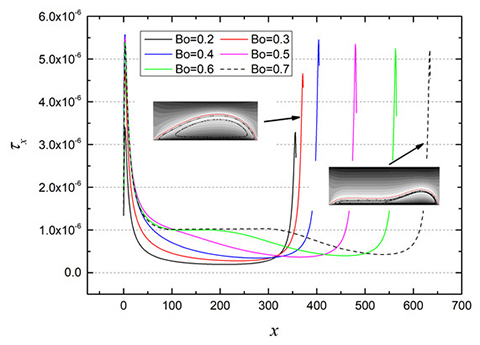