The structure of the velocity field induced by internal solitary waves of the first and second modes is determined. The contribution from second-order terms in asymptotic expansion into the horizontal velocity is estimated for the models of almost two- and three-layer fluid for solitons of positive and negative polarity. The influence of the nonlinear correction manifests itself firstly in the shape of the lines of zero horizontal velocity: they are curved and the shape depends on the soliton amplitude and polarity, while for the leading-order wave field they are horizontal. Also the wave field accounting for the nonlinear correction for mode I has smaller maximal absolute values of negative velocities (near-surface for the soliton of elevation, and near-bottom for the soliton of depression) and larger maximums of positive velocities. For solitary waves of negative polarity, which are the most typical for hydrological conditions in the ocean for low and middle latitudes, the situation is the opposite. The velocity field of the mode-II soliton in a smoothed two-layer fluid reaches its maximal absolute values in a middle layer instead of near-bottom and near-surface maximums for mode-I solitons. 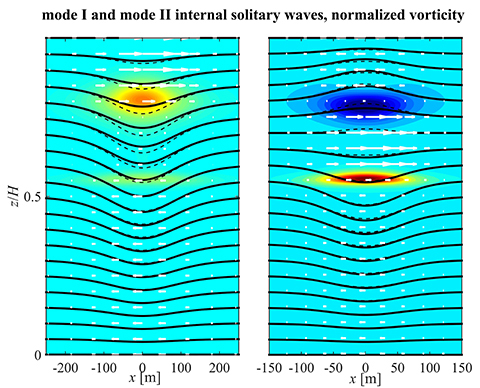