In this paper a computational model for the ventricular flow with a mitral valve and modeled chordae tendineae is presented. The results are compared with an analogous case in which the chordae are not included and their presence is replaced by kinematic boundary conditions. The problem is studied using direct numerical simulation of the Navier-Stokes equations, two-way coupled with a structural solver for the ventricle and mitral valve dynamics. An experimental validation of the model is performed by a comparison of the results with a companion dedicated experiment. It is found that the inclusion of the chordae tendineae makes the model self-consistent thus avoiding the use of ad hoc kinematic constraints to mimic their effect. In this way it is possible to simulate the correct system dynamics without user-defined parameters. More in detail, the results have shown that the mitral valve dynamics can be described also without chordae with the help of ad hoc kinematic constrains, whereas the changes produced in the intra-ventricular flow need the explicit consideration of the chordae in the model. On the other hand, the computational load increases owing to the presence of additional structures that, being thin filaments, are also demanding for the spatial resolution requirements. Since the presence of the chordae tendineae produces only specific differences in the overall flow structure, we conclude that their explicit modeling should be limited to those cases in which their presence is unavoidable. 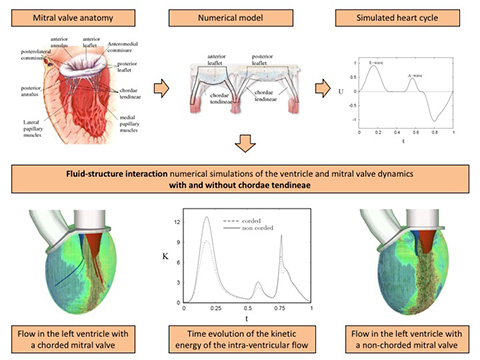