Rheotropism of the dowser texture

In spite of its metastability, the pseudo-planar texture of a nematic layer confined between surfaces with homeotropic anchoring can be preserved indefinitely in certain conditions. The pseudo-planar texture, dubbed “the dowser texture”, is degenerated and therefore sensitive to perturbations. It has been shown recently that the dowser texture is cuneitropic, that is to say, has a tendency to follow thickness gradients. Here, we point out that the dowser texture is also rheotropic or, in other words, has a weathercock behavior: it tends to follow the direction of Poiseuille flows. We observed this behavior in two experiments. In the first one it appears as a deformation of a wound up dowser texture submitted to a slowly alternating linear Poiseuille flow. In the second one we study rheotropic effects of elliptical flow patterns generated by modulation of the gap thickness in a system made of a rigid lens and a flexible glass slide. We show that such elliptical flows can wind the dowser texture and therefore can be used in studies of generation and annihilation of nematic monopoles. 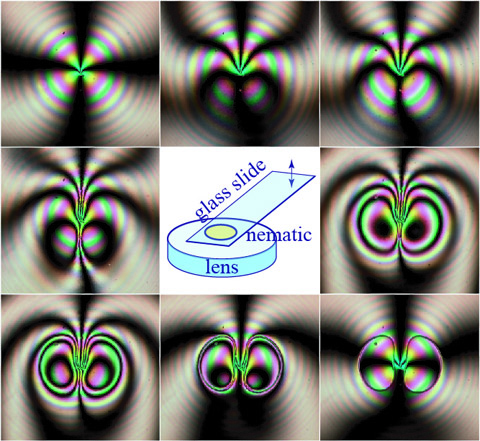