Glycerol is one of the additives which stabilize collagen, as well as globular proteins, against thermally induced denaturation --an effect explained by preferential hydration, i.e. by the formation, in water/glycerol solvents, of a hydration layer whose entropic cost favors the more compact triple-helix native structure against the denatured one, gelatin. Quenching gelatin solutions promotes renaturation which, however, remains incomplete, as the formation of a gel network gives rise to growing topological constraints. So, gelatin gels exhibit glass-like dynamical features such as slow aging of their shear modulus and stretched exponential stress relaxation, the study of which gives us access to the re(de)naturation dynamics of collagen. We show that this dynamics is independent of the bulk solvent viscosity and controlled by a single parameter, the undercooling

below the glycerol-concentration-dependent denaturation temperature. This provides direct proof of i) the presence of a nanometer thick, glycerol-free hydration layer, ii) the high locality of the kinetically limiting process governing renaturation. 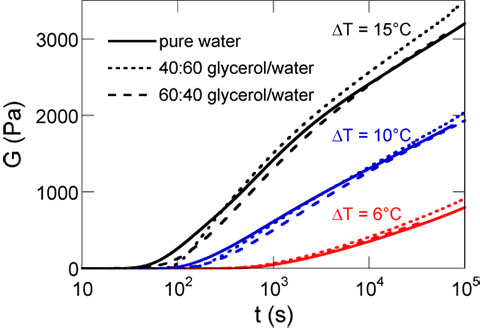