In the study of interactions between liquids and solids, an accurate measurement of the film thickness between the two media is essential to study the dynamics. As interferometry is restricted by the wavelength of the light source used, recent studies of thinner films have prompted the use of frustrated total internal reflection (FTIR). In many studies the assumption of a simple exponential decay of the intensity with film thickness was used. In the present study we highlight that this model does not satisfy the Fresnel equations and thus gives an underestimation of the films. We show that the multiple reflections and transmissions at both the upper and the lower interfaces of the film must be taken into account to accurately describe the measured intensity. In order to quantitatively validate the FTIR technique, we measured the film thickness of the air gap between a convex lens of known geometry and a flat surface and obtain excellent agreement. Furthermore, we also found that we can accurately measure the elastic deformations of the lens under loads by comparing them with the results of the Herzian theory. 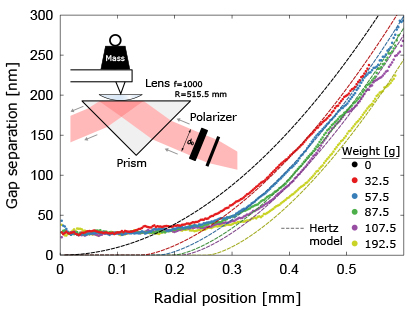