Polyampholytes are polymers that have positive and negative monomers along their chain. The adsorption of polyampholytes on charged surfaces has been the subject of a large number of theoretical, computational and experimental studies due to its importance in a variety of bio and nanothechnological systems. However, computational studies focusing on interaction between polyampholytes and cylindrical charged surfaces are rather scarce. This study, therefore, aims to investigate the conformational properties of block-polyampholytes in the presence of a negatively charged cylinder by means of Metropolis Monte Carlo simulations. Adopting a simplified model in which the electrolyte solution is treated at the Debye-Hückel level, the effects of the ionic strength, the linear charge density of the cylinder and the block length on monomers distributions have been investigated. It was found that increasing the salt concentration promotes a transition from a conformation characterized by large loops to a necklace-like conformation parallel to the surface. It was also shown that, at low cylinder charge density, the increase in salt concentration and the length of the blocks lead to a change in the orientation of the adsorbed chain. 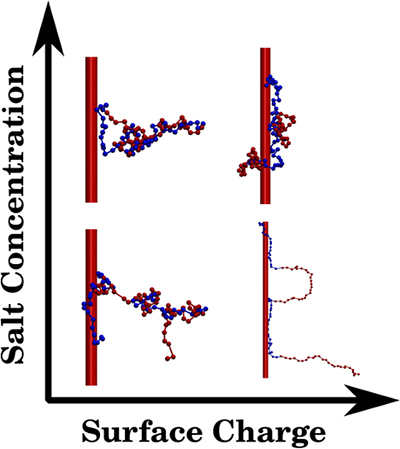