The Discrete Element Method (DEM) is a discrete, particle-based method commonly used in studies involving granular media, e.g. sediment transport, and geomechanics. It is heavily dependent on particle properties, and one important component is the force model, which relates the relative positions and velocities of the simulated particles to the forces they experience. In this paper we model a collection of lightly compacted granular material, released at a short distance above a flat base in a quiescent fluid --similar to the process whereby sediment tailings are released back into the sea during nodule harvesting. We employ different typical force models, and consider how their varying components affect the simulated outcome. The results are compared with a physical experiment of similar dimensions. We find that a realistic simulation is achieved when the force model considers the local solid fraction in the drag force, and incorporates the hydrodynamic effect of neighbouring particles. The added mass effect increases the accuracy of the outcome, but does not contribute significantly in a qualitative sense. 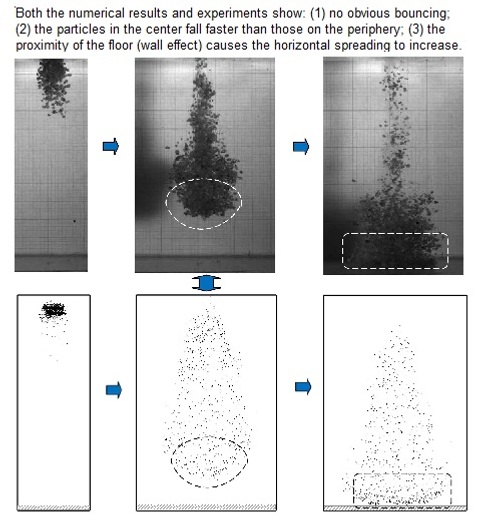